There are, however, other stories also about marriages of Theseus which were neither honorable in their beginnings nor fortunate in their endings, but these have not been dramatized. For instance, he is said to have carried off Anaxo, a maiden of Troezen, and after slaying Sinis and Cercyon to have ravished their daughters; also to have married Periboea, the mother of Aias, and Phereboea afterwards, and Iope, the daughter of Iphicles (original Greek);

and because of his passion for Aegle, the daughter of Panopeus, as I have already said, he is accused of the desertion of Ariadne, which was not honorable nor even decent; and finally, his rape of Helen is said to have filled Attica with war, and to have brought about at last his banishment and death, of which things I shall speak a little later (original Greek).

After fighting alongside Herakles against the Amazons, he snatched away Antiope: some say it was Melanippe, but Simonides says Hippolyte. Therefore, the Amazons attacked Athens, and Theseus with his Athenians defeated them, who had encamped around the Areopagos. Although he had his son Hippolytos with an Amazon… (translated by Aaron J. Ivey)

Illustration p. 98 (without female spectator on right) from G.E. Hatzi, The Archaeological Museum of Olympia (2008)

Two possible reconstructions of pediment where the sculptural group was once located, at Ancient-Greece

View of surviving fragments of figures from pediment, at Ancient-Greece 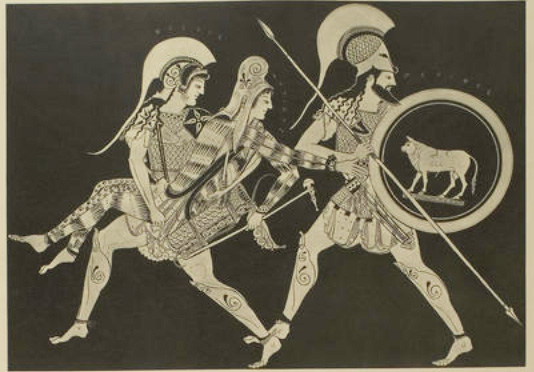 Louvre (view of side B reversed)

…Antiope the Amazon was snatched away by Peirithous and Theseus… (translated by Aaron J. Ivey)

…although Theseus had a son, Demophon, with Antiope… (translated by Aaron J. Ivey)

Theseus did, indeed, marry Phaedra, but this was after the death of Antiope, and he had a son by Antiope, Hippolytus, or, as Pindar says, Demophoon. As for the calamities which befell Phaedra and the son of Theseus by Antiope, since there is no conflict here between historians and tragic poets, we must suppose that they happened as represented by the poets uniformly (original Greek).

He also made a voyage into the Euxine Sea, as Philochorus and sundry others say, on a campaign with Heracles against the Amazons, and received Antiope as a reward of his valor; but the majority of writers, including Pherecydes, Hellanicus, and Herodorus, say that Theseus made this voyage on his own account, after the time of Heracles, and took the Amazon captive; and this is the more probable story. For it is not recorded that any one else among those who shared his expedition took an Amazon captive (original Greek).

On entering the city there is a monument to Antiope the Amazon. This Antiope, Pindar says, was carried of by Peirithous and Theseus, but Hegias of Troezen gives the following account of her. Heracles was besieging Themiscyra on the Thermodon, but could not take it, but Antiope, falling in love with Theseus, who was aiding Heracles in his campaign, surrendered the stronghold. Such is the account of Hegias. But the Athenians assert that when the Amazons came, Antiope was shot by Molpadia, while Molpadia was killed by Theseus. To Molpadia also there is a monument among the Athenians (original Greek).