And in 15, Bellerophontes saved by the boy Glaukos because, carried by Pegasos to the Aleian plain, he was about to be slain by Megapenthes son of Proitos:

Bellerophontes no longer held back his killing by the son of Proitos, or from your †distressed† father †death. Gray fruitlessly† trickery of the family and of Iobates he will avoid, for so . . . spun the Fates’ threads. And you yourself, coming near, warded off the killing of your father, and as a witness of good speech you thought of it (translation by Silvio Curtis).

Bellerophon, son of Glaucus, son of Sisyphus, having accidentally killed his brother Deliades or, as some say, Piren, or, as others will have it, Alcimenes, came to Proetus and was purified (original Greek).

Iobates, in admiration of his [Bellerophon’s] prowess, showed him the letter and begged him to stay with him; moreover he gave him his daughter Philonoe, and dying bequeathed to him the kingdom (original Greek).

For they [Troezenians], too, say that… Bellerophontes came to Troezen to ask Pittheus to give him Aethra to wife, but before the marriage took place he was banished from Corinth (original Greek).

… as he [Bellerophon] was attempting to fly to heaven, and had almost reached it, he became terrified looking down at the earth, and fell off and was killed (original Latin).

Aegina, Museum 235 (cited as “no #”): Protocorinthian black-figure skyphos fragment with Bellerophon, Pegasos and and Chimaira

Thasos, Museum Π 2085 (cited as “no #”): Cycladic plate with Bellerophon, Pegasos and Chimaira 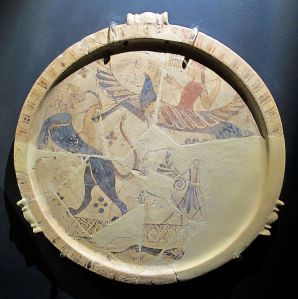 Museum of Fine Arts, image and description (side B) 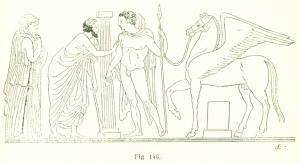 Leningrad/St. Petersburg, Hermitage St 427: forgery of a Lucanian krater with Bellerophon and Stheneboia 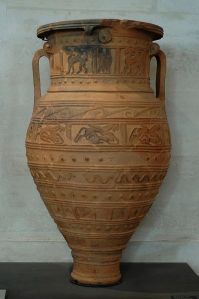 “And the lady bare to wise-hearted Bellerophon three children, Isander and Hippolochus and Laodameia. With Laodameia lay Zeus the counsellor, and she bare godlike Sarpedon, the warrior harnessed in bronze. [200] But when even Bellerophon came to be hated of all the gods, then verily he wandered alone over the Aleian plain, devouring his own soul, and shunning the paths of men; and Isander his son was slain by Ares, insatiate of battle, as he fought against the glorious Solymi; [205] and his daughter was slain in wrath by Artemis of the golden reins. But Hippolochus begat me [Glaucus] and of him do I declare that I am sprung” (original Greek).

The third brother, Sarpedon, we are told, crossed over into Asia with an army and subdued the regions about Lycia. Euandrus, his son, succeeded him in the kingship in Lycia, and marrying Deïdameia, the daughter of Bellerophon, he begat that Sarpedon who took part in the expedition against Troy, although some writers have called him a son of Zeus (original Greek).