At about the same time appeared the monster reared in Crete, the offspring of Pasipha, daughter of Helius, to whom our city was sending, in accordance with an oracle’s command, tribute of twice seven children. When Theseus saw these being led away, and the entire populace escorting them, to a death savage and foreseen, and being mourned as dead while yet living, he was so incensed that he thought it better to die than to live as ruler of a city that was compelled to pay to the enemy a tribute so lamentable (original Greek).

This is the myth about Pasiphae: that she fell in love with a grazing bull and that Daedalus made a cow out of wood and closed her up inside it.  The bull then mounted and copulated with Pasiphae, who became pregnant and bore a child with the body of a man and the head of a bull. 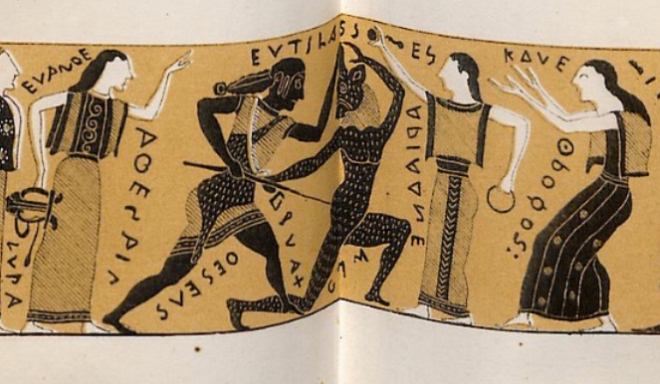 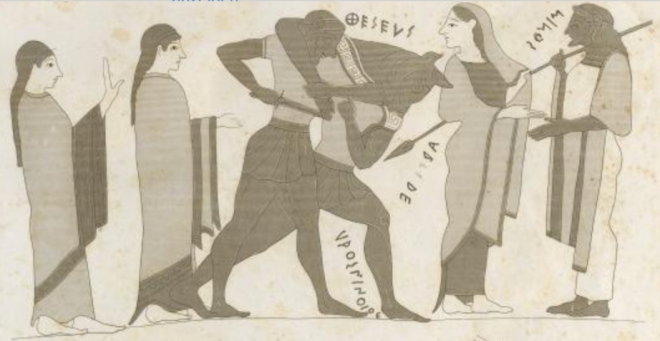 *Philochoros F17 (translation in The Story of Athens: The Fragments of the Local Chronicles of Attika, P. Harding [2008], *p.#*)

Having escaped the cruel bellowing and the wild son of Pasiphae and the coiled habitation of the crooked labyrinth, about thine altar, O lady, they raised the music of the lute and danced the round dance, and Theseus led the choir (original Greek).

Afterwards Daedalus made his escape out of Attica to Crete, where, being admired because of the fame of his art, he became a friend of Minos who was king there. Now according to the myth which has been handed down to us Pasiphaê, the wife of Minos, became enamoured of the bull, and Daedalus, by fashioning a contrivance in the shape of a cow, assisted Pasiphaê to gratify her passion.  In explanation of this the myths offer the following account: Before this time it had been the custom of Minos annually to dedicate to Poseidon the fairest bull born in his herds and to sacrifice it to the god; but at the time in question there was born a bull of extraordinary beauty and he sacrificed another from among those which were inferior, whereupon Poseidon, becoming angry at Minos, caused his wife Pasiphaê to become enamoured of the bull. And by means of the ingenuity of Daedalus Pasiphaê had intercourse with the bull and gave birth to the Minotaur, famed in the myth. This creature, they say, was of double form, the upper parts of the body as far as the shoulders being those of a bull and the remaining parts those of a man. As a place in which to keep this monstrous thing Daedalus, the story goes, built a labyrinth, the passage-ways of which were so winding that those unfamiliar with them had difficulty in making their way out; in this labyrinth the Minotaur was maintained and here it devoured the seven youths and seven maidens which were sent to it from Athens, as we have already related (original Greek).

Zeus loved her, and turning himself into a tame bull, he mounted her on his back and conveyed her through the sea to Crete. There Zeus bedded with her, and she bore Minos, Sarpedon, and Rhadamanthys (original Greek).

And sent [him] to Ida, nymphs…receiving him for father Zeus…and they sent [him] to…and…Androgeos…for Minos, the much-surging…all of them, since…and…and having seen her [in] he fell in love with her…and she, having become pregnant, bore Minos a strong son, a marvel to s[ee;]..for…a body like a man down to his feet…but above, the head of a bu[ll had grown] (translation by Nick Gardner).

Another deed of Theseus they have represented in an offering, and the story about it is as follows:—The land of the Cretans and especially that by the river Tethris was ravaged by a bull. It would seem that in the days of old the beasts were much more formidable to men, for example the Nemean lion, the lion of Parnassus, the serpents in many parts of Greece, and the boars of Calydon, Eryrmanthus and Crommyon in the land of Corinth, so that it was said that some were sent up by the earth, that others were sacred to the gods, while others had been let loose to punish mankind. And so the Cretans say that this bull was sent by Poseidon to their land because, although Minos was lord of the Greek Sea, he did not worship Poseidon more than any other god (original Greek).

Pasiphae, daughter of Sol and wife of Minos, for several years did not make offerings to the goddess Venus. Because of this Venus inspired in her an unnatural love for a bull [corrupt]. At the time when Daedalus came there as an exile, he asked her to help him. For her he made a wooden heifer, and put in it the hide of a real heifer, and in this she lay with the bull. From this intercourse she bore the Minotaur, with bull’s head but human body. Then Daedalus made for the Minotaur a labyrinth with an undiscoverable exit in which it was confined. When Minos found out the affair he cast Daedalus into prison, but Pasiphae freed him from his chains. And so Daedalus made wings and fitted them to himself and to his son Icarus, and they flew away from that place. Icarus flew too high, and when the wax was melted by the sun, fell into the sea which was named Icarian for him. Daedalus flew on to King Cocalus in the island of Sicily. Others say that after Theseus killed the Minotaur he brought Daedalus back to Athens, his own country (original Latin).