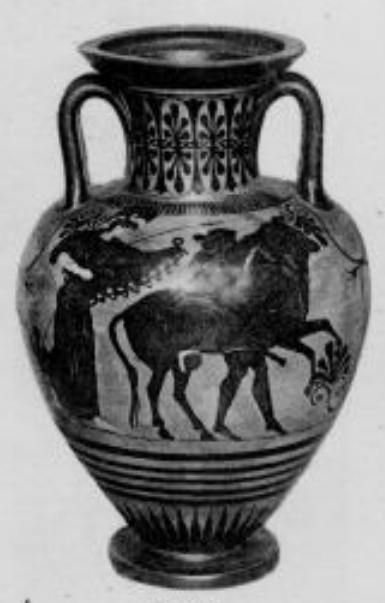 He slew Corynetes, son of Neptune, by force of arms.
He killed Pityocamptes, who forced travellers to help him bend a pine tree to the ground. When they had taken hold of it with him, he let it rebound suddenly with force. Thus they were dashed violently to the ground and died.
He killed Procrustes, son of Neptune. When a guest came to visit him, if he was rather tall, he brought a shorter bed, and cut off the rest of his body; if rather short, he gave him a longer bed, and by hanging anvils to him stretched him to match the length of the bed.
Sciron used to sit near the sea at a certain point, and compel those who passed by to wash his feet; then he kicked them into the sea. Theseus cast him into the sea by a similar death, and from this the rocks are called those of Sciron.
He killed by force of arms Cercyon, son of Vulcan.
He killed the boar which was at Cremyon.
He killed the bull at Marathon, which Hercules had brought to Eurystheus from Crete.
He killed the Minotaur in the town of Cnossus (original Latin).

Theseus, however, being his own master, gave preference to those struggles which would make him a benefactor of either the Greeks at large or of his native land. Thus, the bull let loose by Poseidon which was ravaging the land of Attica, a beast which all men lacked the courage to confront, Theseus singlehanded subdued, and set free the inhabitants of the city from great fear and anxiety (original Greek).